The Psychological Cost of Boring Buildings 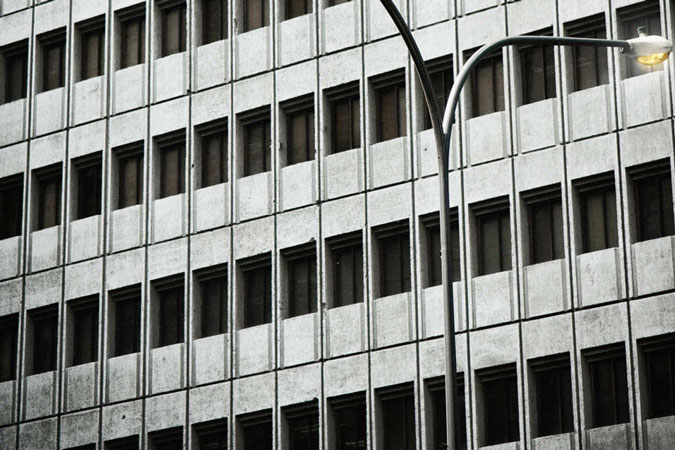 New Yorkers have long bemoaned their city being overrun by bland office towers and chain stores: Soon, it seems, every corner will either be a bank, a Walgreens, or a Starbucks. And there is indeed evidence that all cities are starting to look the same, which can hurt local growth and wages. But there could be more than an economic or nostalgic price to impersonal retail and high-rise construction: Boring architecture may take an emotional toll on the people forced to live in and around it.

A growing body of research in cognitive science illuminates the physical and mental toll bland cityscapes exact on residents. Generally, these researchers argue that humans are healthier when they live among variety – a cacophony of bars, bodegas, and independent shops – or work in well-designed, unique spaces, rather than unattractive, generic ones. In their book, Cognitive Architecture: Designing for How We Respond to the Built Environment, Tufts urban policy professor Justin Hollander and architect Ann Sussman review scientific data to help architects and urban planners understand how, exactly, we respond to our built surroundings. People, they argue, function best in intricate settings and crave variety, not “big, blank, boxy buildings.”

Indeed, that’s what Colin Ellard, a neuroscientist at the University of Waterloo and director of its Urban Realities Laboratory, has found in his own work. Five years ago, Ellard became interested in a particular building on East Houston Street – the gigantic Whole Foods “plopped into” a notoriously textured part of lower Manhattan. As described in his book, titled Places of the Heart: The Psychogeography of Everyday Life, Ellard partnered with the Guggenheim Museum’s urban think tank to analyze what happens when someone “turns out of a tiny, historic [knish] restaurant” and encounters a full city block with nothing but “the long, blank façade of the Whole Foods Market.” 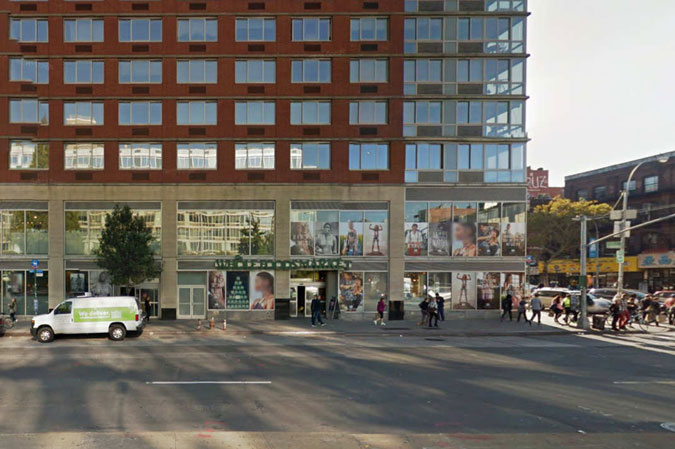 In 2011, Ellard led small groups on carefully planned Lower East Side walks to measure the effect of the urban environment on their bodies and minds. Participants recorded their response to questions at each stopping point and wore sensors that measured skin conductance, an electrodermal response to emotional excitement. Passing the monolithic Whole Foods, people’s state of arousal reached a nadir in Ellard’s project. Physiologically, he explained, they were bored. In their descriptions of this particular place, they used words like bland, monotonous, and passionless. In contrast, one block east of the Whole Foods on East Houston, at the other test site – a “lively sea of restaurants with lots of open doors and windows” – people’s bracelets measured high levels of physical excitement, and they listed words like lively, busy, and socializing. “The holy grail in urban design is to produce some kind of novelty or change every few seconds,” Ellard said. “Otherwise, we become cognitively disengaged.” The Whole Foods may have gentrified the neighborhood with more high-quality organic groceries, but the building itself stifled people. Its architecture blah-ness made their minds and bodies go meh.

And studies show that feeling meh can be more than a passing nuisance. For instance, psychologists Colleen Merrifield and James Danckert’s work suggests that even small doses of boredom can generate stress. People in their experiment watched three videos – one boring, one sad, and one interesting – while wearing electrodes to measure their physiological responses. Boredom, surprisingly, increased people’s heart rate and cortisol level more than sadness. Now take their findings and imagine the cumulative effects of living or working in the same oppressively dull environs day after day, said Ellard.

There might even be a potential link between mind-numbing places and attention deficit hyperactivity disorders. In one case, physicians have linked “environmental deprivation” to ADHD in children. Homes without toys, art, or other stimuli were a significant predictor of ADHD symptoms.Meanwhile, the prevalence of U.S. adults treated for attention deficit is rising. And while people may generally be hardwired for variety, Dr. Richard Friedman, director of the pharmacology clinic at Weill Cornell Medical College, makes the case that those with ADHD are especially novelty-seeking. Friedman points to a patient who “treated” his ADHD by changing his workday from one that was highly routine – a standard desk job – to a start-up, which has him “on the road, constantly changing environments.”

Most ADD is the result of biological factors, said Dr. Edward Hallowell, a psychiatrist who specializes in ADHD, and co-authored numerous books on the subject, such as Delivered From Distraction: Getting the Most Out of Life With Attention Deficit Disorder. But, he explained, he sees a lot of socially induced ADD, too, a form of the disorder that makes it appear as though you inherited the genes, although you really haven’t. And one way you might have the socially induced condition, according to Hallowell, is to suffer severe boredom or live in a highly nonstimulating environment. “It makes total sense that for these people changing where they work or live to add more visual stimulation and daily variety could be extremely helpful,” Hallowell said. At the same time, many adults may feel they have ADHD because the world has become hypersaturated with constant texts, emails, and input. For them, life has become too adrenalizing. “They don’t have true ADHD,” Hallowell said, “but, rather, what I call a severe case of modern life.”

So the trick, it seems, is to design a world that excites but doesn’t overly assault our faculties with a constant barrage of information: Scientists aren’t proposing that all cities look like the Vegas strip or Times Square. “We are, as animals, programmed to respond to thrill,” said professor Brendan Walker, a former aerospace engineer and author of Taxonomy of Thrill and Thrilling Designs. In Walker’s University of Nottingham “thrill laboratory,” devices gauge heart rate and skin conductance to see how people respond to adrenaline-producing experiences such as a roller-coaster ride. And he’s reduced “thrill” to a set of multivariable equations that illustrate the importance of rapid variation in our lives: A thrilling encounter moves us quickly from a state of equilibrium to a kind of desirable “disorientation,” like the moment before you rush down the hill of a roller coaster. “Humans want a certain element of turmoil or confusion,” he said. “Complexity is thrilling whether in an amusement park or architecture.” Environmental thrill and visual variety, Walker believes, help people’s psyche. As many of us instinctively feel a wave of ennui at the thought of working all day in a maze of soulless, white cubicles, blocks of generic buildings stub our senses.

It’s not only that we’re genetic adrenaline junkies. Psychologists have found that jaw-dropping or awe-inspiring moments – picture the exhilarating view of the Grand Canyon or Paris from the Eiffel tower – can potentially improve our 21st-century well-being. One study showed that the feeling of awe can make people more patient, less materialistic, and more willing to help others. In an experiment, researchers showed students 60-second clips of waterfalls, whales, or astronauts in space. After only a minute of virtual images, those who said they were awed also felt less pressed for time. In a second experiment, individuals recalled “an awe-inspiring” event and then answered a range of survey questions; they were also more likely to say they’d volunteer for a charity, as compared to those who hadn’t spent time thinking about a past moment of awe. And in yet another variation, people made hypothetical choices between material and experiential goods of equal monetary value: a watch or a Broadway show, a jacket or a restaurant meal. Those who recently “felt awe” were more likely to choose an experience over a physical possession, a choice that is linked with greater satisfaction in the long run. In other words, a visual buzz – whether architectural or natural – might have the ability to change our frame of mind, making modern-day life more satisfying and interactive.

It’s important to note, however, that architectural boredom isn’t about how pristine a street is. People often confuse successful architecture with whether an area looks pleasant. On the contrary, when it comes to city buildings, people often focus too narrowly on aesthetics, said Charles Montgomery, author of Happy City: Transforming Our Through Urban Design. But good design is really is about “shaping emotional infrastructure.” Some of the happiest blocks in New York City, he argues, are “kind of ugly and messy.” For instance, Ellard’s “happier” East Houston block is a “jumbled-up, social one”— the Whole Foods stretch, in comparison, is newer and more manicured. Sometimes what’s best for us, Montgomery explained, just isn’t that pretty.

His research also shows cacophonous blocks may make people kinder to each other. In 2014, Montgomery’s Happy City lab conducted a Seattle experiment in which he found a strong correlation between messier blocks and pro-social behavior. Montgomery sent researchers, posing as lost tourists, to places he coded as either “active façades” – with a high level of visual interest – or “inactive façades” (like long warehouse blocks). Pedestrians at active sites were nearly five times more likely to offer help than at inactive ones. Of those who helped, seven times as many at the active site offered use of their phone; four times as many offered to lead the “lost tourist” to their destination.

Fortunately, it’s not necessarily a dichotomy – new architecture can achieve the optimal level of cacophony and beauty. Take the 2006 Hearst Tower in midtown Manhattan. From the outside, the façade is likely to jolt city dwellers – if anything will – from their daily commutes, while “thrilling” employees who enter it each morning. Designed by Pritzker Architecture Prize–winning architect Norman Foster, Hearst Tower is a glass-and-steel skyscraper, 40 stories of which are designed in a triangular pattern contrasting the 1920s Art Deco base. For many who walk by, Hearst Tower’s design may not be the easiest to understand; it’s both sleek and old. The top looks like it traveled from the future. Inside, workers travel upon diagonal escalators, up a three-story water sculpture, through the tower’s historic atrium” flooded with light. It’s not the view from the Eiffel Tower or the Grand Canyon, but it’s probably as close a modern lobby can come to awe-inspiring. Few New Yorkers who pass by would find this building boring. And they’re likely happier – maybe even nicer to each other – because of it.